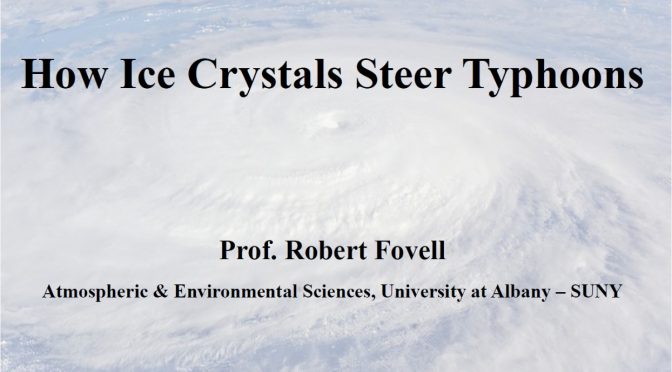 The first Distinguished Ogura Lecture in will be held on the first day of the MSJ 2018 Autumn Meeting in Sendai International Center.

Professor Fovell conducts research in mesoscale and convective scale meteorology, primarily using high-resolution numerical models. He has written many papers on squall lines, tropical cyclones, sea breezes, boundary layer rolls, gravity waves, and climate classification, among other subjects. He has taught a variety of subjects, including mesoscale modeling and dynamics, atmospheric thermodynamics, synoptic meteorology, fluid dynamics, and atmospheric data analysis. His research work has been supported by agencies such as the NSF, NASA, NOAA, and the California Air Resources Board, and also private sector companies.

Professor Fovell has served as chair of the Faculty of the UCLA College of Letters and Science (2007-09), as chair of the American Meteorological Society (AMS) Committee on Mesoscale Processes (2009-11), and as co-chair of the AMS Michio Yanai Symposium (2011). In 2005, he received the UCLA Distinguished Teaching Award (the Eby Award for the Art of Teaching) and is the 2012 recipient of the AMS Teaching Excellence award. His video course Meteorology: An Introduction to the Wonders of the Weather was published by ‘The Great Courses’ in 2010.