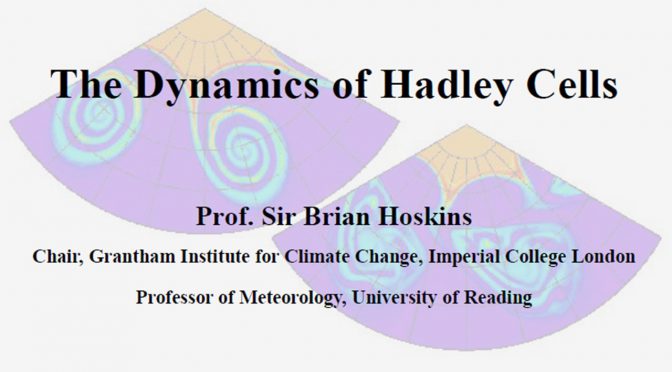 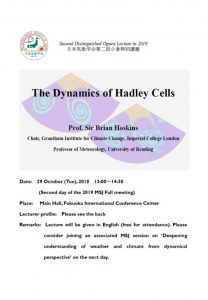 The Second Distinguished Ogura Lecture in will be held on the second day of the MSJ 2019 Autumn Meeting in Fukuoka International Congress Center.

Remarks: Lecture will be given in English (free for attendance). Please consider joining an associated MSJ session on ‘Deepening understanding of weather and climate from dynamical perspective’ on the next day.

Professor Sir Brian John Hoskins is a British dynamical meteorologist and climatologist, and one of the most famous scientists in these fields. His research has focused on understanding atmospheric motion from frontal to planetary scales, using a range of theoretical and numerical models. Professor Hoskins is perhaps best known for his work on the mathematical theory of extratropical cyclones and frontogenesis, particularly through the use of potential vorticity. He has also produced research across many areas of meteorology, including Rossby wave propagation and the Indian monsoon.

Professor Hoskins’s international roles have included being vice-chair of the Joint Scientific Committee for the World Climate Research Programme, President of the International Association of Meteorology and Atmospheric Sciences and involvement in the 2007 IPCC assessment. He is a member of the science academies of the UK, USA, China and Europe and has received a number of awards including the top prizes of the UK and US Meteorological Societies and honorary DScs from the Universities of Bristol and East Anglia. He was knighted in 2007 for his services to the environment.